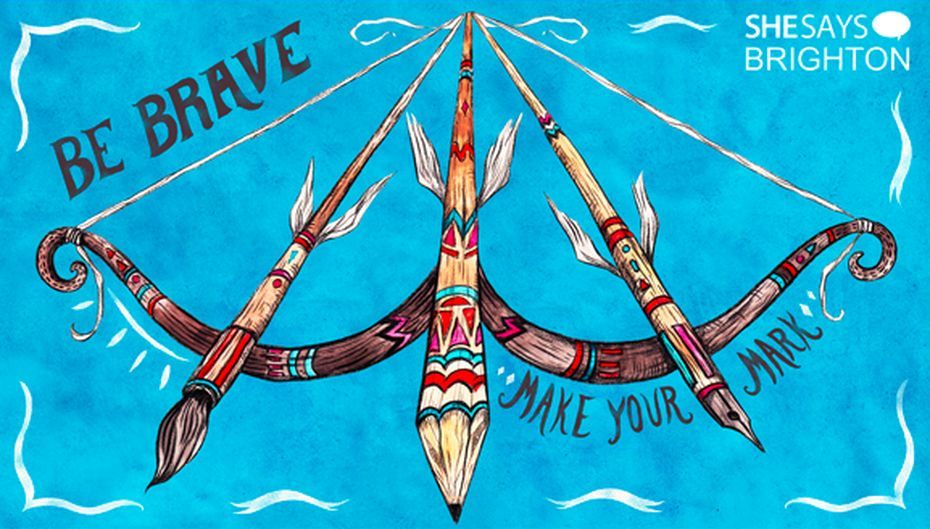 Last night’s She Says Brighton event was another huge success! With a full house, 3 brilliant speakers and drinks supplied by local Brighton company, Brilliant Noise, the evening was set to be a great time (and we got to check out Clear Left’s new swanky office!).

The theme for the evening was ‘Be Brave! Make your mark..’ and the first speaker of the evening was Rachel Mortimer from EngAge & Create who’s just graduated from the School for Social Entrepreneurs. Rachel told us how when things started unraveling in her life, she knew she had to sink or swim and it was during this crisis point that she decided to make some big changes in her life; quitting her job and setting off on an epic around the world adventure. Different encounters throughout her travels eventually led to her returning back to the UK, being inspired by her Nan & setting up EngAge & Create, a not for profit organisation which aims to improve people’s lives who have dementia through art.

Rachel has had huge success with this so far and is rolling this very important social enterprise out across more places in England. Although every day throws up new challenges, it is clear to see that Rachel loves what she does, impacting in such a positive way on people’s lives.

Rachel has some big ideas to expand and is looking for some assistance from techy people, if you think you could help and would like to hear more get in touch with her @engageandcreate

Next up was Data extraordinaire Beth Granter @bethgranter, what a clever woman; at 6 years old she learnt 4 years of primary school maths in just 6 months, learnt to read bar codes and by the time she was 16 she was building websites. Beth works at Brilliant Noise with some of the biggest brands out there.

What struck me the most with Beth has been her cunning way of using social media as a platform for her activism. She was part of the campaign which received national coverage with the Guardian to stop an abstinence for GIRLS sex education bill being passed in parliament – needless to say this bill was not passed and has led to further campaigning for comprehensive sex & education based education https://www.facebook.com/stopdorries

She started the ‘Queers Against Cuts’ Campaign in Brighton which trended on Twitter. And, staged a small demo against Coca Cola sponsoring the Russian Olympics (who we all know repress any gay rights), Coca Cola accidently uploaded an image (see below) of the protest, to their website!

And last up we had the lovely & very talented Alice Parsons (who created the gorgeous image for the event).  When Alice was young, like most of us she did not know what she wanted to do when she grew up, but she knew she was creative and decided to embark on a course at Brighton College specialising in illustration. Since then she has not looked back, and her journey has been quite the roller coaster at times.  Starting off at BAFTA award winning agency LittleLoud, she found herself in the frustrating situation of being the person in charge of making tea. But she did not allow this to bring her down, in fact she turned this into a unique opportunity for herself – she immersed herself in her creative surroundings, absorbing everything possible from the people around her, she learnt the lip syncing programme that no-one wanted to do, made up her own tasks  – what she did was make herself indispensible to the company. Alice has since gone into what seemed to be the scary world of freelance. Alice has been having great success working for numerous Brighton and London agencies and loves what she does, especially drawing owls.

I love being part of the She Says team, what an inspirational bunch of ladies!  Of course thanks to the amazing Rifa for arranging another brilliant event.